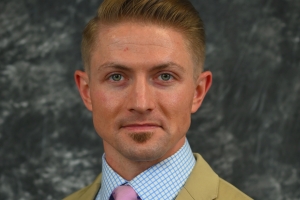 As we take time to acknowledge some of our graduates this spring, it is always interesting to explore each students’ unique story of how he or she first became interested in data science.

Dustin Ballentine of Greenville, SC has an interesting background; his career began in the U.S. Army where he spent eight years as an Army Engineer. In his early years as a lieutenant, data science didn’t initially cross his mind as something he’d ever pursue. He was mostly involved with combat engineering and working alongside the infantry to breach and build obstacles. As his career progressed, he became more involved in operational decision making at the brigade level and above. Data collection and analysis are required when making these decisions, but Dustin came to realize that very few people, himself included, had the knowledge or background to implement these skills. “The data were there, as was the interest in analyzing it, but the skills were lacking. So when my wife and I decided to leave the Army, I reflected back on that capability gap, and how me being more data-literate may have benefitted the organization.” Dustin realized that data science can be applied in many various career paths, and this led to his decision to work towards his master’s degree in Data Science and Business Analytics.

He specifically chose to attend UNC Charlotte for this degree program because of the School of Data Science’s reputation for being one of the early investors in data science education. He was also drawn to the location, since Charlotte has a plethora of opportunities for job placement in this field upon graduating. The city is also desirable due to its proximity to Dustin’s family, beaches, and mountains.

Dustin will graduate on May 13th, 2022 and will immediately begin working full time as a data scientist at Torqata Data and Analytics in Huntersville, North Carolina. He hopes to use his deeper understanding of data analytics to not only derive business value, but also advance into managerial and mentoring roles. He is excited to contribute towards solving some of today’s major societal challenges beyond the scope of just one particular industry. Dustin believes data science is a core foundation for reaching these solutions.

As the countdown to graduation dwindles down, Dustin leaves behind some words of advice for any prospective or future students of data science. A strong foundation in probability, statistics and physics is definitely beneficial. “Data science involves a good deal of hypothesis exploration, trial and error, and the ability to creatively consider a wide set of possible tools and techniques to solve a problem, all with a very careful eye for details; I think physics helps develop that type of thought process.” Most importantly, Dustin recommends maintaining the mindset of a lifelong learner. Data science is bound to consistently evolve over the coming years, so it is important to remain curious and consistently open to learning new concepts. “Personally, I find that thrilling, and if you do too, data science might be a great fit.”

Best of luck to you, Dustin!